“This encounter presents an interesting example of a night attack of destroyers against an isolated cruiser, with very nasty results for the attackers.

The British had escorted with the entire Fleet of Alexandria a convoy to Malta and had not been annoyed by the enemy.  An enemy civil airplane had detected on October 11 the presence of the convoy at about 100 miles South East of Malta and had informed accordingly. The Italian Air force however, failed to locate it in the course of the remaining day.

With the prospect that the ships that had reached Malta was probable to depart the night of October 11 –12, the Italians established a night patrol east of Malta with 4 destroyers and 3 escort destroyers.  The British naval force left indeed Malta that very night escorting a small convoy to Alexandria and one of her cruisers, the HMS AJAX, that was sailing north came into contact with the 3 Italian escort destroyers.

The Italian ships approached at close range the cruiser, attacked with their torpedoes and at the same time fired their guns. The AJAX with able maneuvering avoided the torpedoes but suffered serious damages from the artillery shells, while from the 3 attacking destroyers the R.N. AIRONE and R.N. ARIEL sunk.

In the meantime, 4 more Italian destroyers arrived.  HMS AJAX detected with her radar one of them, the R.N. ARTIGLIERE, and with a preemptive hit immobilized the Italian ship, before the destroyer had time to launch her torpedoes. Another Italian destroyer, the R.N. AVIERE, was also hit by the AJAX and also didn’t launch her torpedoes, because the British cruiser changed course and interrupted the battle.  Thus, the 2 remaining destroyers didn’t take any part in the battle.  One of them towed the ARTIGLIERE, but next morning they received continuous air attacks and when 2 British cruisers and 2 destroyers appeared the destroyer that was towing interrupted the tow and escaped.

The British cruiser HMS YORK then sunk the ARTIGLIERE, the towed boat, by launching a torpedo after her crew had boarded the lifeboats the cruiser had thrown.  A cruiser squadron that the Italians later sent did not succeed to contact the YORK squadron. 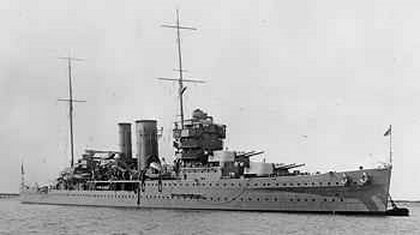 Admiral Cunningham narrates that the Italian destroyers had fought fiercely but, as the Italian side also recognizes it, were not sufficiently prepared for a night battle.  There is no doubt that AJAX’s radar had significantly contributed to the very unfavourable for the Italians result of this battle. It is worthwhile noting that it was only after the battle of Cape Tainaron, in March 1941, that the Italians realized that the British ships disposed advanced radio-detection equipment.

A posteriori, the Italian themselves admit that if their Fleet had sailed they would have had good chances to encounter the British force, because the next morning the Italian reconnaissance had detected her west of Crete.

As counterpart of the loss of the 3 destroyers and the damages suffered by a fourth one, the Italian Air force attacked with bombers and torpedo planes the British fleet that was returning to Alexandria and had registered a success.  She hit the British cruiser HMS LIVERPOOL with a torpedo that cut-off her prow.  The cruiser was then safely towed to Alexandria.  On the other hand, the Italian bombers attacked once more, unsuccessfully, the Italian cruiser squadron that was returning to her base.”

For additional information, comments, questions or feedback concerning this site, please contact us